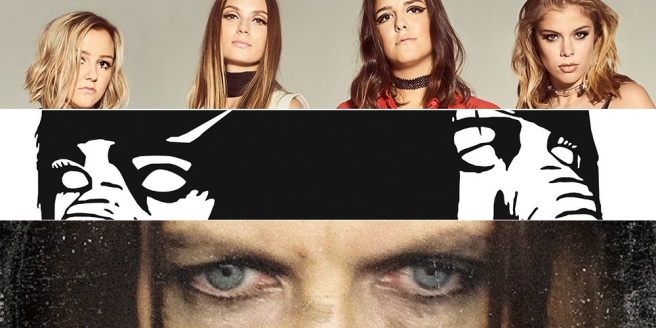 If ever there was a year when we needed a little extra dose of happiness in our lives, 2017 was it. Here are the 10 songs that injected the most joy into my life, whether I was sitting on a train heading to work, walking around the city with my headphones on, or driving around town with my boys.

I know, technically this was released in 2016, but I heard it a lot this past year. Musically, it just feels inspiring, but then I did what I so rarely do: listened to the lyrics. When I realized this song was all about leaving home, leaving “all I had,” to dedicate your life to your band, to rock and roll, I actually teared up. It’s just a beautiful thing to me, that passion for music.

I don’t particularly like Imagine Dragons. I don’t hate them, but I don’t love them. When they come on the radio and I’m by myself, I tend to change the station. But the key here is “by myself.” When I’m with my nine-year-old boys and these guys come on, I have to listen to the song because they love everything they’ve heard from this band, especially this song. They’ve actually memorized most of the lyrics and danced around the house singing to a karaoke track, which means a lot when you’re talking about kids who aren’t the most extroverted sorts. So this song made me happy this year because it made my boys happy.

More Dear Rouge can’t come fast enough as far as I’m concerned. My love for this band and my interactions with the fabulous Drew and Daniel McTaggart are well documented on this blog. When I saw them play here in Toronto in July they played a few new ones that amped me up even more for the long-awaited second album. But this very Blondie-inspired first single is tiding me over nicely – and it became even more “Studio 54” with its gorgeously glam, seemingly Andy Warhol inspired video, filled with primary colours and oddly posed background actors.

For the most part I go with radio singles on these lists, unless there isn’t one, because often those are the best songs on an album. But not always. The new Foos record, Concrete and Gold, is filled with gold, and songs that my boys love, but this album track is both my favourite and probably the weirdest. I love the fuzzed out guitar and the familiar Taylor Hawkins bashing of the drums, not to mention a healthy dose of Grohl screams. But I think it’s the quirkiness of the groove, how it’s almost inaccessible, that really gets me. Every time I think I’ve locked into it, it unexpectedly adds another beat or two to a bar. I love that it feels like a groovy rock song, but throws you off with that weirdness. Maybe I’m a masochist, but somehow that frustration pleases me.

I had never heard of this Montreal band, whose debut LP Springtime Devil was released in 2016, until I read Toronto Star music critic Ben Rayner’s rundown of his favourite discoveries from Austin’s South by Southwest festival. His description of their sound as “dirty blues rock” sold me. There’s not much I love more, musically speaking, than dirty blues rock. And Rayner did not lie. Singer Anna Frances Meyer’s voice is massive and gritty and cuts to your soul. And the same can be said of the reverb-drenched guitar sound of this raunchy duo.

HAIM’s second album brought me tons of joy this year. It was the soundtrack to much of my summer and I think I’d rank it No. 3 on my top albums list for the year. This single feels like summer: it’s bright and shiny and much more optimistic than pretty much anything else on what’s ultimately a breakup album. The horns and backing vocals give it a little bit of a Phil Spector, 60’s girl group feel. Back in July, when the album was still new to my ears, I wrote this about the song: “I love everything about this song. I love the bent notes leading into the solo, like fireworks soaring into the sky before exploding with colour. I just wish, as a guitar nerd, that the solo got a little more love in the mix. Crank it up! A guitar solo needs to be front and centre.”

I alluded a bit to the rough times of 2017 in my intro, but one of the best things about those rough times is that they inspired Juliana Hatfield to write and record her best solo album since at least 2008’s How to Walk Away. That album, Pussycat, probably stands as my second favourite of the year and it’s filled with anger tinged with dark humour, bathed in ear-wormy melodies and grungy guitar. I think this particular song perfectly encapsulates everything that this album is.

I actually wasn’t sure about this song on first listen. I know DFA has always had some synthy sounds in their music, but this seemed almost too electronic for me – for a DFA song, anyway. But those pounding drums pulled me in, the soaring chorus drew me in even closer and then the song screamed in my face, “Those keyboard parts are amazing, dude! Chill out about them, already!” And I chilled out about them and learned to love them. Also, my boy Liam loves this tune.

Much like DFA’s first single from their newest album, this first single from QOTSA caught me off guard. The sound was a bit of a departure, especially rhythmically. But unlike “Freeze Me,” this one grabbed me by the bones instantly and made my body move. In fact, here’s what I tweeted the day they released the song:

Prior to hearing “Money” on the radio, I’d seen the Toronto band’s name here and there as a band to watch out for, but I knew nothing about them beyond that. Then I heard this song, and it totally wooed me with its “woos,” slacker delivery in the verses, and wildly infectious chorus. It wasn’t long before the song convinced me to download what for me is the album of the year, Late Show. I call it my album of the year because it’s so good that I’d be fine with putting all of its 12 songs on this list, even though it’s a Top 10 list and I have a self-imposed rule to only include one song per band, because every one of those songs makes me happy.